The St. John’s reefs lie on the Tropic of Cancer in Foul Bay, directly south of the Peninsula (Ras) Banas, near Hamata and close to the Sudanese border. They cover an area of sea of roughly 290 km² and offer a great diversity of diving environments. They are now a top drawcard for Red Sea liveaboards searching a little further off the beaten track for new attractions.

The highlights of diving the Red Sea’s Deep South include some terrific coral walls and gardens, including a mix of both soft and hard coral formations – probably the best in the Red Sea, plenty of tunnels, caverns, overhangs, swim-throughs and caves, and great visibility – ideal photographic opportunities. Reef fish life is abundant and the deep walls and brisk currents at some of the sites attract grey reef, hammerhead and thresher sharks, and other predator fish such as mackerel, barracuda and jacks.

Habili Ali is a small oval shaped submerged reef and is the easternmost dive site in the St. John’s reef system. You’ll likely cover half of the entire reef wall on one dive, exactly which section will depend on the current and sun direction. Reef predators such as jacks and grey reef sharks are commonly seen when scuba diving here as the current is often strong. Pods of bottlenose dolphins can be seen at any moment as they hunt in search of food. Hammerhead sharks and manta rays are also encountered less frequently. Best time for an oceanic white tip encounter at Habili Ali is in May and June.

Magnificent coral formations are abundant on the reef walls and ridges run down off the western and eastern sides; black snapper, triggerfish and surgeonfish are plentiful. The deeper sections host some huge gorgonians and sea whips. There are many crags in the wall, some opening to caverns, which make interesting features to explore for groupers and cardinalfish. The shallow reef flat is deep enough to allow you to drift slowly across admiring the underwater scenery as you complete your safety stop. Habili Ali can be a challenging site but it is an undoubted highlight of diving this part of the Red Sea.

Gota Kebira is a larger reef, being over 800m long, and has several different drift dives to try out. The northern section has 2 plateaus that are ideal for whitetip reef sharks and bluespotted stingrays. The current often splits here, making it ideal for shark encounters. The eastern and western sides have deep sloping reefs of predominant brown soft corals; the eastern side is normally dived in the morning and the western side in the afternoon.

In the southeast corner the wall is broken by deep fissures that you can enter and tunnels to dive in. Elsewhere in the south, there is a sloping plateau that unicornfish and rabbitfish make home. The shallows here have many colourful magnificent anemones and green turtles often feed and rest here.

Gota Soghayr is a small steep walled reef, with gorgonians and sea whips dominating the deep, and plentiful juvenile fish and soft corals carpeting the shallows. Often Napoleonfish drift around at the edge of vision, and groups of bumphead parrotfish maraud across the flats in search of food.

The southern side is the best area to explore in the latter part of the dive as there are many overhangs to explore and a cavern that you can enter in the shallows at a depth of 10m.

Habili Gaffar is a smaller reef flat, perhaps 30m across at the surface, with a ledge running around it at 20-35m deep before the reef plunges in to the depths of the Red Sea. Its small size means you can circumnavigate the entire reef 2 or 3 times during a dive or zizag up one side, depending on the strength of the current. The strong currents attract snapper, barracuda, tuna and reef sharks on the northern side where a small protusion forms at 40m.

The shallower sections of the reef are dominated by pink clasping soft corals and fairy basslets. Schools of bigmouth mackerel race across the reef top in search of food. Lionfish slowly stalk in the shallows, waiting for their opportunity to strike on unsuspecting prey.

Dangerous Reef is the most southerly of the St. John’s reefs, but seems oddly named since it is one of the few dive sites in the Southern Red Sea that offer a reasonably shallow flat bottom. This makes it good for an overnight anchorage and night diving, where you can find squid, Spanish dancers, and hunting moray eels. The topography here makes for great swim-throughs. There are many breaks in the reef shallows that allow easy and safe penetration.

Abu Basala is one of the larger St. John’s reefs and you could make 3 or 4 different dives here. This sickle-shaped reef is unusual for the deep south Red Sea diving since it does not have steep walls. Instead the reef edges offer mazes of columns, gullies, cracks, outcrops, balustrades and folds that run down the wall to the sandy bottom a mere 15-20m below. This reef offers relaxation and a break for scuba divers a little tired from deep drift diving.

Due to the depth of many of the sites at St. John’s, the area is designated for experienced divers only. 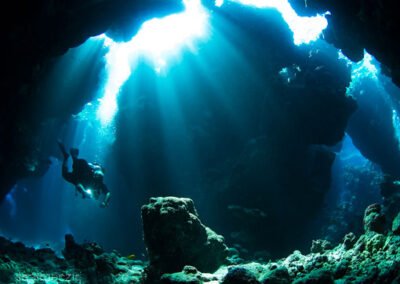 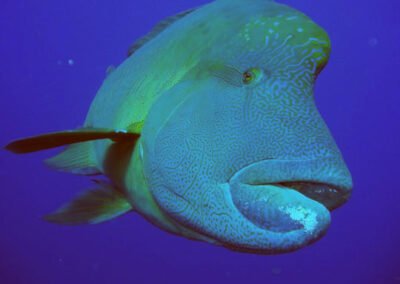 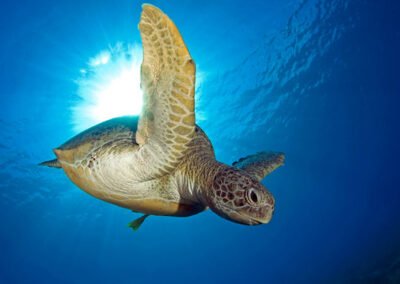 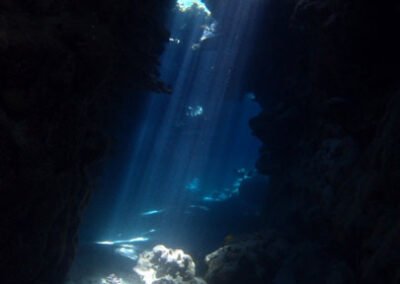 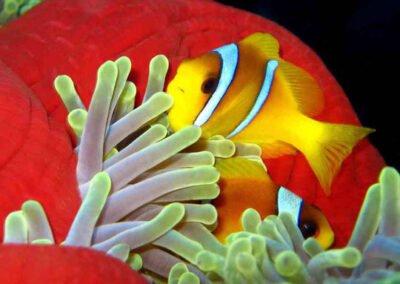 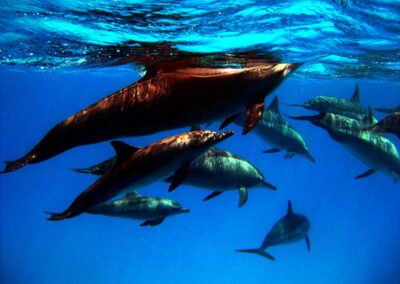