The Thistlegorm wreck, on the west coast of the Sinai Peninsula and 40 km from Sharm El Sheikh, is the best known and most popular wreck dive in the Red Sea. The 125m long British army freighter sank after just 18 months of her launch in April 1940. Her last voyage commenced on the 2nd of June 1941 as she sailed to Alexandria and was loaded with wartime supplies during World War II. A long list of inventory includes tanks, aircraft, armoured vehicles, Jeeps and Bedford trucks.

In spite of being privately owned and operated, the SS Thistlegorm was nevertheless fitted with a 4″ anti-aircraft gun and a heavy calibre machine gun when she was drafted for war duty.

The ship laid anchor at what was thought a safe location north of the Straits of Gubal, today known as Shag Rock. It was to proceed through the Suez Canal upon receiving instructions.

But it was never to be. In the early hours of 6th October 1941 the Thistlegorm was split in 2 and sank almost instantly after being hit by 2 bombs from a German long range bomber. The hit only blew a hole in the port side of Hold no. 5 but then cargo tank ammunition ignited, causing the bulk of the damage.

All but 9 of the crew escaped and the HMS Thistlegorm reached its final resting place 30m deep on the sandy sea bed, where she lies upright with her stern section separated from the main body by 20m. The ship is largely intact except for the impact area but the split hull reveals the invaluable cargo, where trucks, motorbikes, a train and even Wellington boots can be seen.

On the stern the guns remain in excellent condition and the blast area is littered with artillery. The site offers so much to see that it takes 2 days of diving just to orientate yourself.

The ship was rediscovered by Jacques Cousteau in 1956 and is arguably the most sought after scuba diving wreck in the world. It is thought that the Sinai Peninsula’s Thistlegorm is the most frequently dived site in the world. Indeed, so many divers penetrate the shipwreck daily that many of the holds have air pockets trapped against their ceilings. With its holds full of World War II relics, it is little wonder that it holds such fascination to so many.

The wreck sits upright on the seabed at 33m. To dive the bow section you can descend onto the main deck area at 15m and enter Hold no. 1 from a large square entrance way in the floor close to the main anchor chains. The ship has 2 levels in its holds and it is possible to swim through the wreck from Hold 1 to 3, using the internal interconnecting doorways at a maximum depth of 25m.

Diving inside this section of the SS Thistlegorm you’ll find BSA motorbikes, Morris automobiles, Bedford trucks, trailers and armoured cars, stowed tightly away as if still ready for use, many still with rubber tyres and glass windows intact.

Holds 1 and 2 also contain Lee Enfield rifles, whilst Hold 3 has bombs, munitions crates, grenades and anti-tank mines. The are also piles of boots and shoes strewn across the holds and some spare parts for tanks and planes. Marine life in these holds is limited to some small squadrons of soldierfish and sweepers. There is no coral growth inside the silted holds.

Amidships is where you can see the full force of the devastation that took place. The hull has been forcibly peeled back here by the explosions to reveal the ship’s innards – large boxes of ammunition shells and artillery lying among the S S Thistlegorm’s mangled wreckage. There are many lionfish here and schools of blackspotted sweetlips take shelter from the currents. An upturned Bren Carrier tank lies on the port side and a locomotive engine sits on the sea bed here, thrown skyward by the blast.

Towards the stern you’ll find 2 machine guns on turrets, hanging precariously over the port side where the stern has listed, further reference to the hostilities of the period. The ship’s large propeller is easily identified once you swim around the rear of the ship at 32m.

As you make your way back up and across the top of the Thistlegorm nearing the end of your dive, you’ll find a lively marine scene. Orange-spotted and Heber’s trevally hunt schools of fusiliers, large schools of teira batfish follow scuba divers around, crocodilefish lie hidden on the deck floor, and a hawksbill turtle or two brush past in search of food, unperturbed after many years of frequent encounters with divers.

The wreck is best dived in the early morning from a liveaboard boat, before the daily boats arrive and turn the site into a rich diver soup. But the SS Thistlegorm rightly remains the Red Sea and Sharm El Sheikh’s foremost scuba attraction. 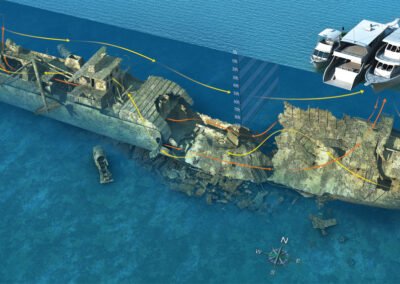 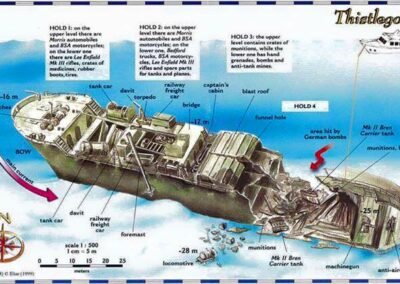 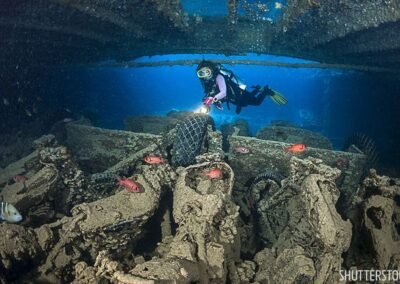 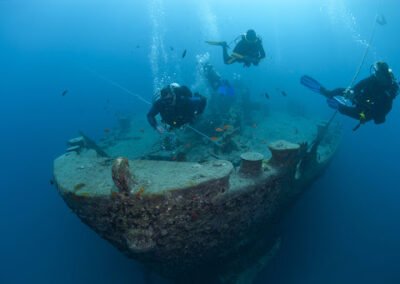 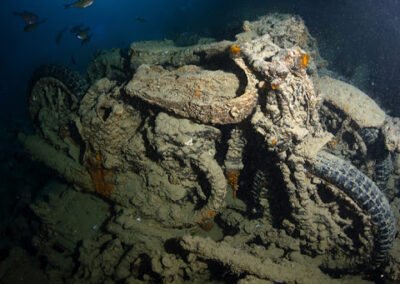