The Salem Express was a former 115m long passenger ferry which sank in 1991 at great human cost just south of Safaga. The immense tragedy of this event makes diving the Salem Express a unique experience that leaves a lasting impression on most scuba divers. She rests on her starboard side on a flat sand bottom at 27m of depth, with the shallowest section at just 7m.

There is an undeniable eeriness to diving a wreck where the human tragedy is so evident. Lying on the sea floor are everyday personal items such as a handbag, a briefcase, a child’s tricycle. The ship’s lifeboats also lie next to the vessel’s hull. Diving the wreck has been a matter of controversy due to the numbers of lives lost. The official death toll is 470 lives, but estimates from the salvage operation put the number of recovered bodies at 850. The presence of human remains inside the ship means that the Salem Express was declared as a maritime tomb and penetration is forbidden, apart from in the cargo area. This means you can explore the whole wreck from bow to stern in one dive, but the site should not be disturbed.

At the bow, the ship’s anchors remain in position, as does the open bow door which allowed water into the car deck. The f fo’c’sle still has the anchor windlass winches mounted on it, along with ventilation ducts protruding through the deck. The port side of the doomed ship has many windows into cabins that gaze silently towards to surface. The companionway runs along the main deck from fore to aft, complete with handrails. The ship’s stern and views of the rudder are absolutely stunning. The Samatour Company logo can still be seen on the ship’s funnels.

You will likely start your dive by sinking down to the bow where you can see the impact damage and the open bow doors. Nearby is the captain’s bridge, part of which can be penetrated. Since the wreck lies on its port side you can fin along what was the upper deck gazing at the metal roof sheets that now lie scattered on the sea bed. Towards the stern you can see the unused lifeboats and penetrate the vehicle loading area. Rumour has it that since not all the bodies could be extracted part of the vessel was sealed closed forever.

The northern and southern edges offer wall diving with heavy coral and seafan coverage. Here you might see schooling snappers and trevally. You will spend the later stages of the dive around the starboard side where you can peer down into the cabin windows almost all of which are broken, presumably when removing the bodies. Inside there are seating and bunk beds some with mattresses still there, rising above the rusted springs.

Marine life is not one of the major attractions to diving here. Innumerable pipefish have made their home in the Salem Express, and schools of brightly coloured parrotfish and butterflyfish graze off the hull. There is still very little coral growth here. Whereas most wrecks seem like such distant events that there is little thought given to the victims, it is impossible to ignore the tragedy of the Red Sea’s Salem Express, and you may surface from this dive with more profound thoughts than just what fish you have seen.

It was on the 15 December 1991 that the Salem Express was steaming towards the Port of Safaga from Jeddah (Saudi Arabia). Onboard, were pilgrims returning from Mecca, and the ship’s passage had already been delayed for 2 days due to mechanical problems. Towards the end of the journey, the weather took a turn for the worse, with high winds and heavy waves buffeting the ship.

Captain Moro had skippered the ferry for 3 years and knew the waters off Safaga very well. He decided to take a familiar shortcut between the Hyndman Reef and the Egyptian coastline south of Safaga, instead of the recommended route to the north around Panorama Reef. What he hadn’t realized was that his bearings were out by almost 1 km and, just before midnight, the Salem Express struck the reef, tearing a gaping hole in the starboard bow and forcing the ship’s bow car doors to open, causing a huge influx of sea water. 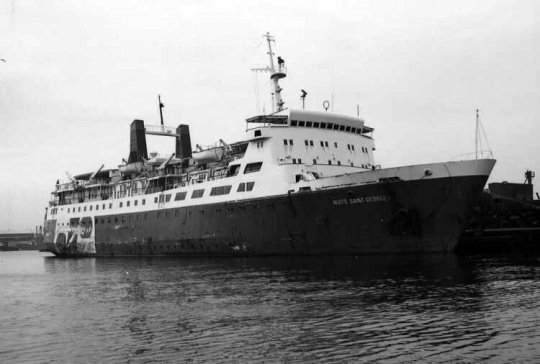 Within minutes the ship had a severe starboard list on her as panic broke out onboard. Within 20 minutes the ship sank in almost 30 meters of water, taking with her many of the passengers who were trapped below decks. It was reported that of the 578 passengers and 71 crew that were onboard, only 180 survived by staying afloat in the open sea. The official death toll stands at 464, however the Egyptian Navy carried out a rescue operation 2 days later which lasted 3 days. It was estimated that 850 bodies were recovered with many more left inside as it was deemed too dangerous to continue the operation deep inside the lower decks. The Navy was assisted by professional divers from Hurghada and Safaga and the experience was so traumatic that many never returned to scuba diving again. It is not difficult to imagine the terror of the sinking and the grim task of those first scuba divers in the aftermath.

The Salem Express started ‘life’ as the Fred Scamaroni. It was built at La Seyne, France between 1963-65. A fire caused a delay in launch and the ship finally began service i between Marseille and Corsica in 1966. The ship was 115 metres long, with a 18 metre beam and a draught of 5 metres. It was capable of speeds of up to 20 knots. The official carrying capacity was 1,200 persons and 142 vehicles. There were also 428 cabins for passenger accommodation.

In early 1980, the Fred Scamaroni was sold to a Danish shipping company, renamed the Nuits Saint George, and used briefly for the Ramsgate – Dunkirk ferry service route on 15 May 1980. In November 1980, the Nuits Saint George was sold to an Egyptian shipping company and renamed Lord Sinai, and later the Al Tahra, providing a service on the Aqaba-Suez route until 1988. Finally the ship was sold to Samatour Shipping Company (Hussein Salem was the owner) and renamed the Salem Express. She sailed on the Jeddah-Suez route from 1988 until the time of her sinking in 1991.