The Best Diving in the Sinai Peninsula

About 20 km south of Sharm El Sheikh, on a slim peninsula towards the most southern tip of Sinai, lies Ras Mohammed, the first and best kept national park in Egypt. The area can be accessed from both resorts and liveaboard diving cruises. It is said that the name is from a wind-carved cliff in the area, which resembles the features of Prophet Mohammed, believed to have visited here in the 7th century.

Surrounded by fringing coral reefs that emerged after a change in the coastline 70,000 years ago, the park is characterised by vertical overhangs at least 100m deep. Due to its location on the Sinai Peninsula at the juncture of the Gulf of Suez and the Gulf of Aqaba, the combining waters of differing salinity from each gulf has resulted in a spectacular array of reef and pelagic fish, diverse coral reef and luxuriant sea walls; ideal for some unforgettable Red Sea scuba diving on the Sinai Peninsula.

Because of its exceptional beauty and scientific significance, the Egyptian government declared Ras Mohammed a protected area in 1983. The national park is now 480 km² but at the time it had an area of only 97 km² and it is a success today because of local awareness and the rangers who patrol the grounds and surrounding seas. Diving is allowed in designated areas only and visitors must leave the park by sunset. It is believed to be one of only a few popular tourist areas in the world that has no effluent discharge in to its waters.

If Ras Mohamed is the most spectacular diving area near Sharm El Sheikh, then Shark Reef and Yolanda Reef are the prized scuba spots of Ras Mohammed. These reefs offers an opportunity to spy every single species of fish of the Red Sea, right here in the Sinai Peninsula. A menagerie of pelagics can be seen, including hammerheads and gigantic tuna. An ever present school of barracuda and snappers are residents of Ras Mohammed National Park and it’s a great place for scuba divers to see Napoleon wrasse.

The sites are best dived as a drift starting from Shark Reef and continuing to Yolanda Reef. These are 2 twin mountain-like peaks rising up from a sandy sea bed that is spread out deep below the surface. There is also a smaller reef called Satellite Reef beyond Yolanda Reef which you can explore all around depending on the strength of the current. Being not far from Anemone City, which is a good drop-in location, the site’s eastern side is a sheer, vertical wall, illuminated by swarms of orange and purple anthias, and black and white pullers dancing about the purple and orange soft coral trees. Keep an eye out in the blue when cruising past Shark Reef for the grey reef sharks which give this reef its name.

The other side, facing the west, is much shallower and constitutes part of the plateau that surrounds Yolanda Reef. There are literally thousands of jackfish, batfish and all kinds of sting rays, giant moray eels and lyretail hogfish on the densely coralled saddle. Watch out for scorpionfish, rarely seen on the other dive sites but regularly spotted here.

Finish your dive above the wreckage of the ‘Yolanda’, a wreck that made this reef its final resting place in the 70’s. Its cargo of British standard toilets, bath tubs and pipe tubes remain on and forever as part of the shallow reef. If the current is strong when you enter the water you might find yourself here quite quickly, and you can enjoy the humorous sight of so many toilets on the sea floor. There is a place where there are 7 of them lined up in a row – a favourite spot for comedy photographs but beware of the fire coral if you are in a shorty or you may get off the loo with a stinging sensation.

Get caught up in the hustle and bustle of the busy underwater metropolis of Ras Mohammed’s Anemone City with its sprawling highways and by-ways of hard and soft corals. It is a broad shoulder of reef just north of Shark Reef. Prolific anemones harbour a permanent populace of anemonefish, but with plenty of other fish species to give it a truly cosmopolitan feel. The mornings are the best time to dive Anemone City, when it lives up to its name with rush hour fish traffic, as the city’s streets come alive with the bustling activity of its prolific fish life.

In the shallow waters of Anemone City are the Heteractis sea anemones after which this Sinai dive site is named. There are literally thousands of the attendant Red Sea anemonefish, which are extremely territorial and protected by the stinging tentacles of their host anemone.

Reef fish typical of Ras Mohammed and the Sinai Peninsula are also present in considerable numbers. The majestic regal angelfish brightens up the underwater scene with its bright yellow and blue patterned body. Wrasse such as the cigar and Klunzinger’s wrasse are omnipresent, as well as yellowtail tang. It’s a good spot to try to identify some of the Red Sea’s endemic butterflyfish species such as the redback butterflyfish and the masked butterflyfish, feeding on coral poyps and hydroids.

With no mooring and a generally strong current, Ras Ghazlani is done as a drift dive, which is the perfect way to appreciate the tranquillity of this site. The preservation of its delicate beauty is thanks to the site having been closed off to divers by Ras Mohammed National Park for many years. One of the treasures of Sharm El Sheikh, it is by far one of the healthiest and most diverse coral sites in the Sinai region.

Located at the mouth of Marsa Bareika, this site consists of a steep slope covered by coral heads. Dropping down to 15 metres, the reef wall descends gradually as you go deeper with abundant fish life all across the reef. Pufferfish, eagle rays, groupers and Napoleonfish dot the reef, and keep your eyes on the blue for some pelagic action. Whatever marine life exists in the Red Sea, you can be sure to find it here.

A deep dive, Ras Zaatar is located on the northern tip of the Ras Mohammed peninsula. The reef here is similar to but more contoured than Ras Ghazlani. It is made up of a steep wall which extends very deep down to house a large variety of marine life. The wall features a series of vertical undulations and indentations, creating a number of chimney-like structures which make the wall an interesting experience with ever-changing light and overhead vistas.

A few large caves and overhangs provide cover to glass sweepers and a range of soft corals. You’ll find hundreds of longnose hawkfish flitting around the black corals, which are found deeper along the wall. The wall is covered in soft and hard corals with a preponderance of Sessile xenia (Anthelia glauca) and Broccoli soft coral (Lithophyton arboretum) but also with many small samples of acropora and gorgonian fans. Throughout this dive you will see large numbers of anthias, damselfish and sergeant majors (Adubefduf vaigiensis).

Around the corner heading into Marsa Barika, the wall gives way to a sandy slope scattered with many coral bommies that create a coral garden home to a variety of glassfish, lionfish and some large Malabar groupers. Also look out for Sohal Surgeonfish (Acanthurus sohal), and Blue triggerfish (Pseudobalistes fuscus). In and around the wall you can spot Red Sea anemonefish and fire dartfish plus Forskkal’s Goatfish foraging in sandy patches.

Many pelagic fish visit this area of the park, so make sure when you’re diving here to look out for skipjack tuna, barracuda, jacks and eagle rays as well as black-tipped reef sharks.

Jackfish Alley is a shore dive and is located only a short distance from the beach. Most often done as a drift dive, you can start at a white mark on the cliff from where you drop down to a cave at about 5 metres, which is full of glassfish. Towards the south lies a sandy coral-covered plateau buzzing with marine life, and is one of Ras Mohammed’s most photographed coral pinnacles as it’s swirling with glassfish.

Further south, the plateau narrows into a sandy gully – Jackfish Alley. Coral growth is good overall and the fish population is excellent. White tip reef sharks can often be found by alert scuba divers, taking an afternoon nap on the sandy plateau.

It used to be that you could see sharks in large numbers at Shark Observatory from the nearby observation cliff on the peninsula, but most sharks have long ago been moved to the great “Shark Heaven in the Sky” by the shark trawlers. However, despite the absence of hundreds of sharks, Shark Observatory is still a fantastic dive. The location is literally a vertical wall that extends down to 90m, sloping outwards only at its foot. There are numerous caves which are home to sweeping schools of glassfish as well as very impressive overhangs and huge gorgonian fans.

Coral growth is excellent, with a variety of both soft and stony species, and extends upwards in very interesting formations. The swarms of pelagic fish such as jacks, trevallies and barracuda, as well as a selection of die-hard resident sharks, still make the Ras Muhammad’s Shark Observatory a fantastic dive. 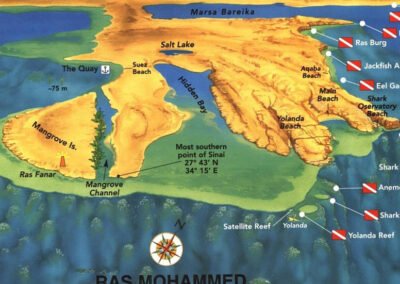 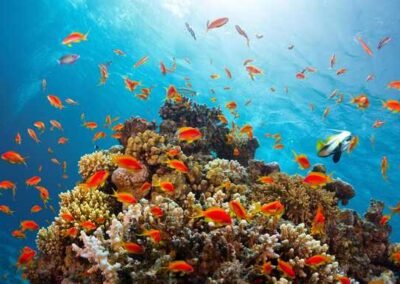 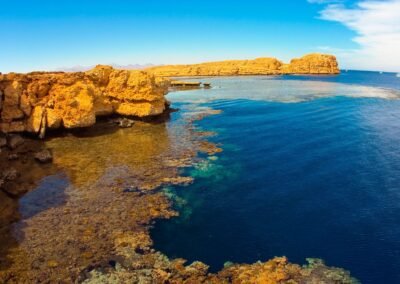 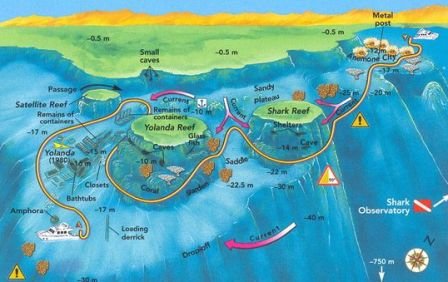 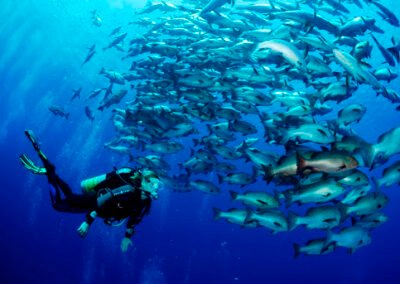 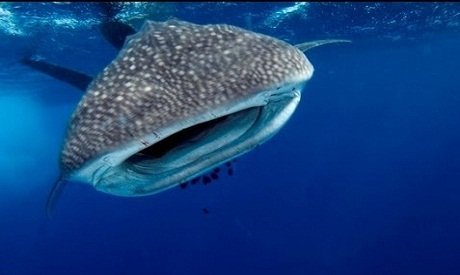