This is probably The Red Sea’s most-famous single dive site. It’s popular for the huge amount and great diversity of marine life that divers can encounter here. This is the main and best place in The Red Sea to dive with several species of sharks, including the Oceanic Whitetip Shark (Carcharhinus longimanus). You might think that to encounter pelagics like this at such an unspoilt reef that the dive site is in the middle of nowhere. Actually, it’s located just 9km. from the coast, making it reachable by daytrip diving boats from the Marsa Alam area.

The reef is located quite near to the coast, considering what a fatastic dive site it is. Just 26km north of Marsa Alam and 9km out to sea, the dive site is easily reachable by day trip and liveaboard boats.

How to get to Elphinstone

Liveaboard Boat, Day Trip Boat You can dive at Elphinstone Reef by day trip from Marsa Alam or on a liveaboard diving safari. If you go on a day trip, expect the dive site to be busy in the high season. But liveaboards can enjoy early-morning and early-evening dives, without the day-trip crowds.

Who can dive at Elphinstone

All levels. Minimum 20 logged dives. Elphinstone Reef has plenty of areas that are shallow enough for Open Water Divers to enjoy. However, currents can be strong at times, so it’s not a dive site that is suitable for new or inexperienced divers.

You might wonder how this tiny speck on the charts – a three hundred metre finger-like stretch of reef, just twenty to forty metres wide, could be such an attraction.

This sliver of reef runs approximately north-south. The middle section can usually be seen from the surface breakers as it lies barely concealed below the surface at a depth of just one to two metres.  However the reef descends down to an arrowhead point at around 40 metres at its’ southern most point while the northern section descends in steps to around 42 metres.

Go any further north or south and you descend near vertical cliffs. Similarly the east side is also an almost perpendicular drop off while the west is less steep and slightly sandier with a number of overhangs and small caves.

Since its’ first mention in the first ship log records in 1827, no one has known quite how deep the surrounding waters are –

“Distant from the Egyptian shore about three leagues,” noted Captain Denton of the British navy, “It is steep and at a distance of half a mile no ground at one hundred fathoms.”

All that can be said is that the depth descends to several hundred metres into the deep blue – making for an eerie but beautiful contrast with the reef’s many colourful coral types, especially the purple and pink soft corals and graceful red gorgonians – their tentacles moving slowly in the strong sea currents.

There is also the dangerously enticing sarcophagus archway at a depth of 52 to 65 metres near the southern tip of the reef.   Legend maintains that one of Egypt’s Pharaohs lies buried here, and you can just make out in the dim light the shape of a sarcophagus shaped mass encrusted in coral.  However you should not descend this deep without your professional guide’s approval.  This type of depth far from the shoreline is only for very advanced and experienced divers.

Marginally more accessible are two pinnacles of coral on the northern plateau at around 42 metres depth but most divers would be better advised not to descend below 30 metres which is sufficient to explore most of the reef’s length.   Visibility is generally good at an average of 20 metres. 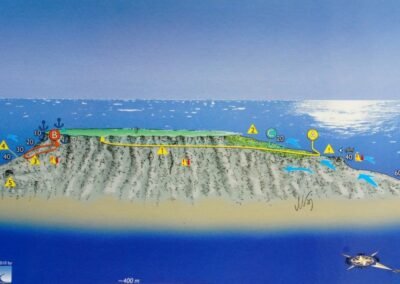 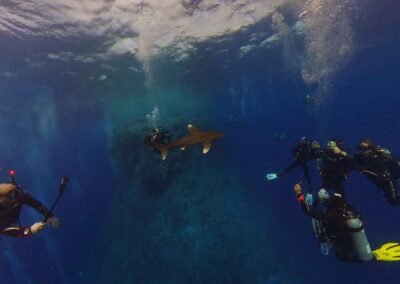 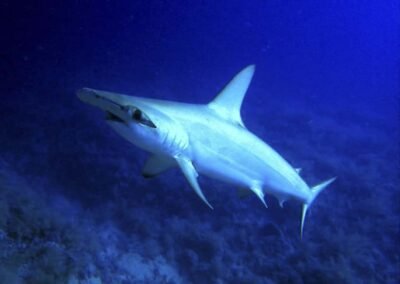