In the Shadwan Channel, just off the north coast of Shadwan Island (the Egyptian Red Sea’s largest island) north of Hurghada, lies Shaab Abu Nuhas Reef. This submerged reef has brought passing ships more than a fair share of bad luck. There are 5 cargo shipwrecks now lying off its northern slopes so if you enjoy wreck diving then this part of the Red Sea is for you. In order from west to east …

The Giannis D, a 100m general cargo vessel built in Japan but under Greek ownership, hit the Abu Nuhas Reef at full tilt on 19 April 1983. The ship, laden with timber, sank to 24m with the stern and bow still intact but amidships is now a crumpled mess. The engine room at a depth of 13m offers easy and superb penetration through clouds of glassfish.

You can investigate the multilevel rooms and passageways here for octopus and giant moray eel. The bow mast extends out horizontally from the boat, creating a great spot to search for scorpionfish, gobies and nudibranchs. To end your dive you can simply climb the main mast up to the shallows at 4m and perform your safety stop there.

The British built Carnatic is one of the oldest wrecks in the Red Sea and is many scuba divers favourite at Abu Nuhas. It hit the reef here on 12 September 1869, laden with gold, wine and cotton on route to India. The cargo ship initially balanced on top of the reef but after 36 hours it succumbed to the elements and its fate, snapping in two and sinking parallel to the reef at 24m. The crew and passengers managed to make use of the delay by escaping on lifeboats to Shadwan Island, 3 km to the south. However, 31 lives were lost on the island due to the cold nights whilst waiting for rescue to arrive. All the gold was remarkably salvaged some 2 months later by another British ship.

Now a century and a half later, this 90m long wreck lies on its port side in remarkably good condition. Its wooden flooring has rotted away to reveal its iron ribbed inner holds, lending the site an eerie feeling of being inside the skeletal remains of some gigantic prehistoric whale. You can dive the entire length of the ship, looking into its holds full of sweepers, glassfish and a few batfish.

The frame is overgrown with soft corals and hydroids and is home to nudibranchs such as the Chromodoris quadricolor and Phylidiella pustulosa. Be careful when you penetrate here since many broken glass wine bottles remain on its floor. You can end your dive by either ascending up the buoy line towards the bow of the boat from 12m or make your way up the adjacent reef slope dominated by fire corals and bicolor pullers.

The Chrisoula K was a 98m Greek registered freighter that sank on 31 August 1981, laden with floor tiles. The ship lies with its stern and propeller at 26m and its bow in shallow water at only 3m. It sits more or less upright but the stern is slowly separating. The wreck offers plenty of swim-throughs and penetration diving opportunities but beware of the numerous obstructions such as fallen beams and poles. Its superstructure is now encrusted with a layer of hard corals, and is home to flatworms, lionfish, Arabian Picasso triggerfish, and clown sand wrasse. Dolphins also pass by here occasionally.

The Kimon M is the deepest of the Red Sea wrecks within recreational scuba diving depths here. Its stern lies on the seabed at 32m, with its bow shallower at 15m. This 120m German cargo vessel sank on 12 December 1978, laden with lentils. Initially the boat sat upright on the reef but later currents and wind pushed the ship into deeper water on its starboard side. Much of its cargo and engine were recovered after its sinking. The wreck harbours several different species of pipefish.

The Seastar is the 5th shipwreck at Abu Nuhas, but since it lies in water 90m deep, it is not frequently dived, and certainly not by recreational divers. 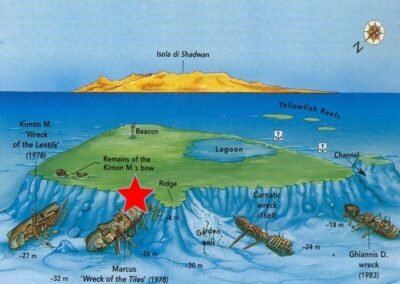 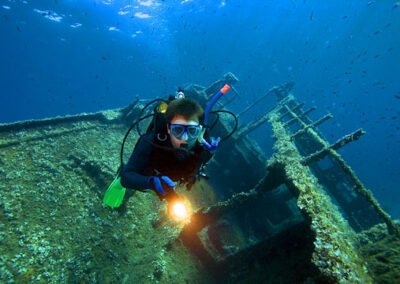 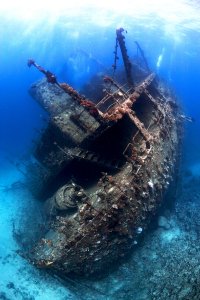